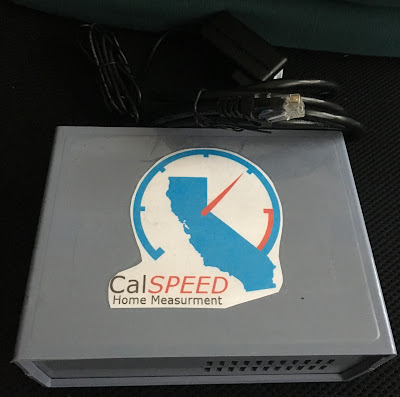 Ever wondered how fast your internet speed is at home? Sure, you can use speed test web sites, but do you know how much your speed varies depending on what sites you visit?

For instance, did you know that going to a site on the east coast from your home on the west coast can slow down your speed by more than 50%?


I have Comcast for my home service, and my plan offers up to 75 megabits per second, which is over 18 times faster than what I get at work (more on that later). The tests that ran over last night revealed that when my connection went to a west coast server, I got as high as 92 megabits per second, but when it went to an east coast server, my speed dropped to around 39 megabits per second. Moreover, the difference in round trip time (latency), is huge. West coast latency averaged 17 milliseconds, while east coast latency was in the mid-80s. Generally speaking, if your latency is below 100 milliseconds, your internet service can support real-time streaming services (assuming other factor such as packet loss and jitter are within range).

As you can tell from the DIY-looking box in the image above, we're still alpha testing the home measurement device, and we hope to have production versions available for volunteers by 2Q 2018.

Here's a summary of my results: 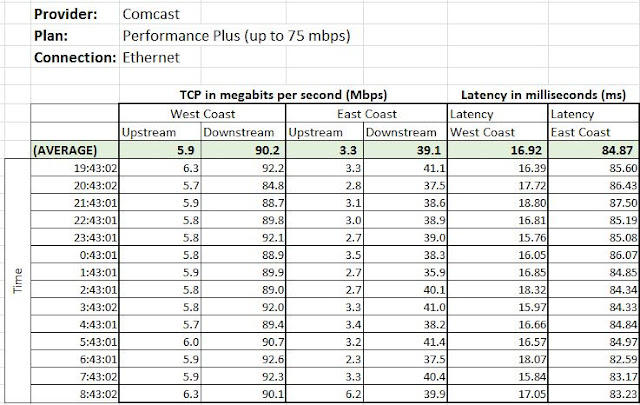 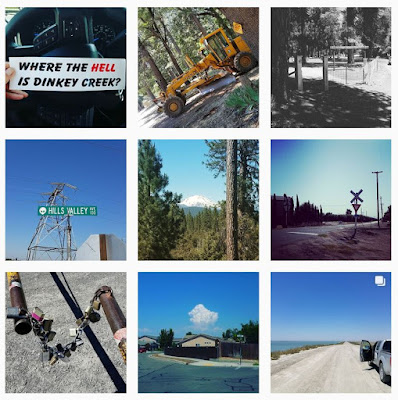 We're entering the last week of field testing with only the northern part of Central Valley and Orange County. Average speeds appear to be very similar to those from last fall.

Compare the above speeds to those from last fall's:

The progress map below shows completed locations in red and upcoming in blue. 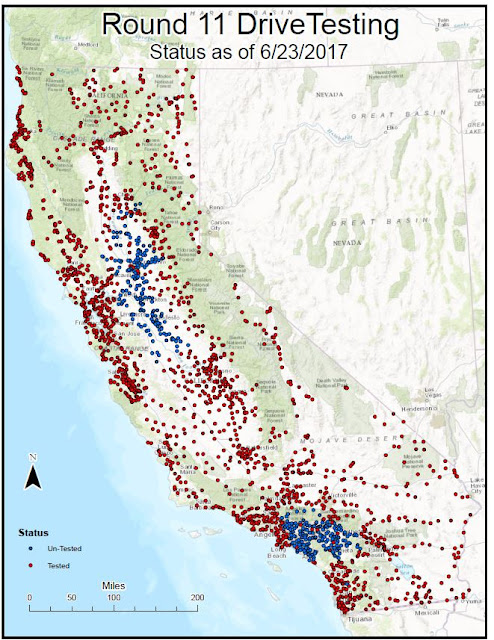 Posted by Rob Osborn at 4:15 PM No comments: 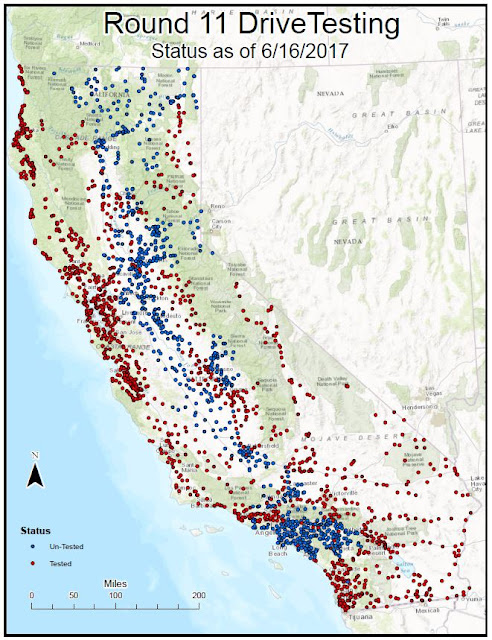 Coming into Week 4 of Spring 2017 mobile field testing, our drivers have compiled a large collection of memorable photos. Follow them on Instagram at: cpuc_broadband_testing

Here is a sample of some of their work. 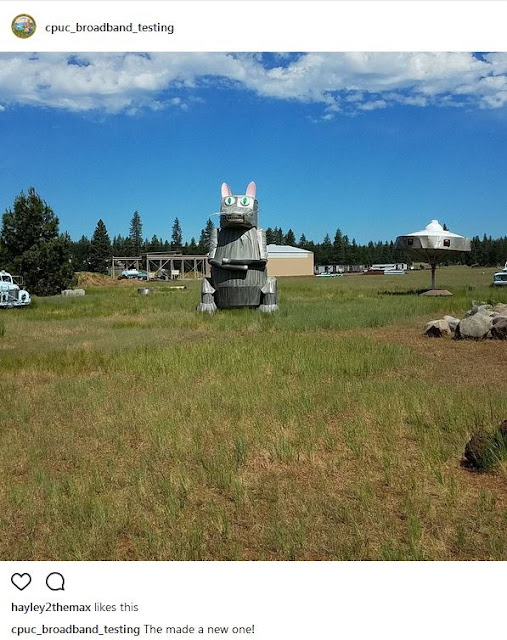 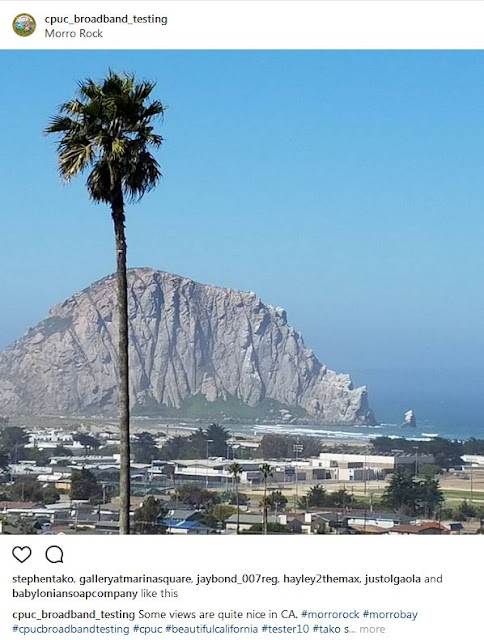 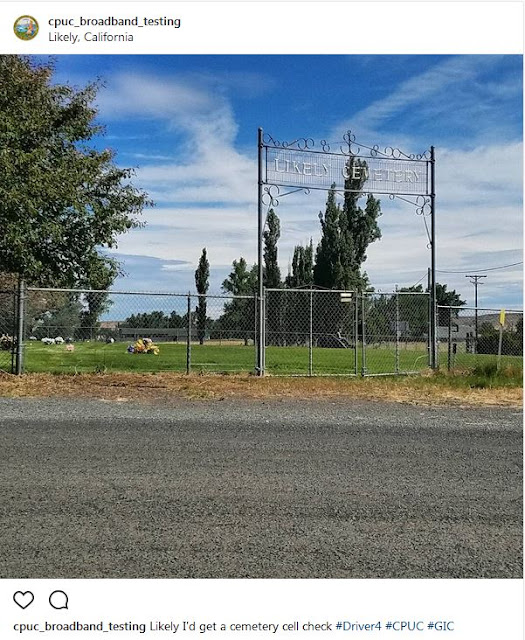 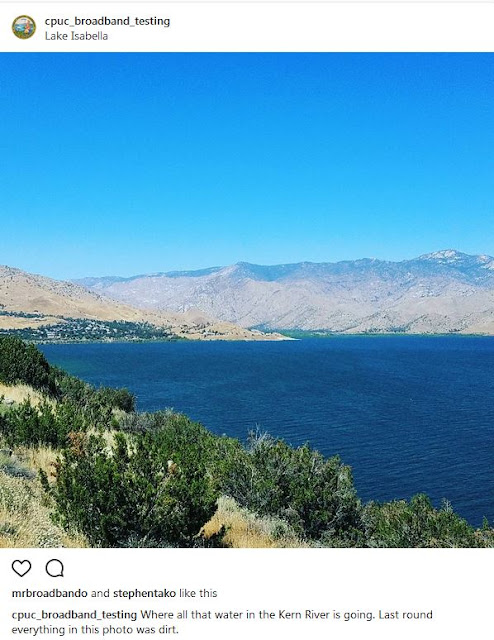 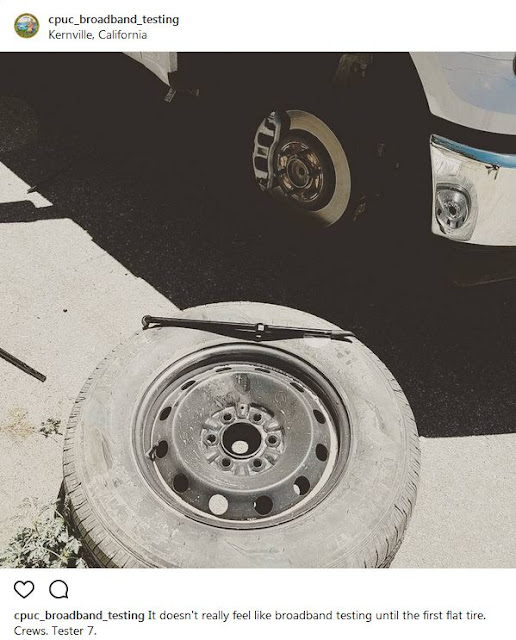 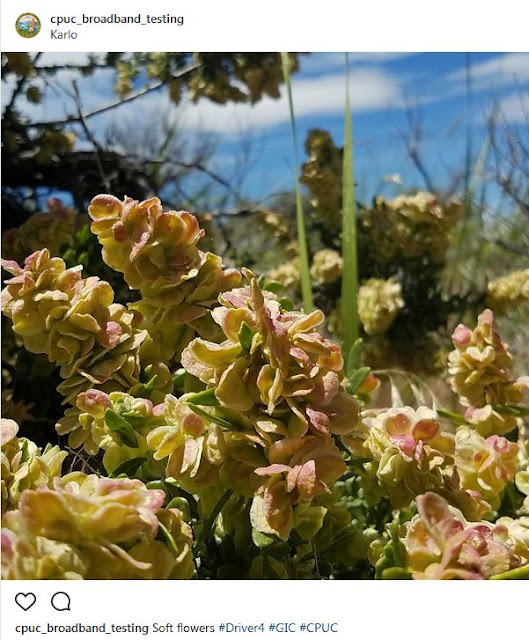 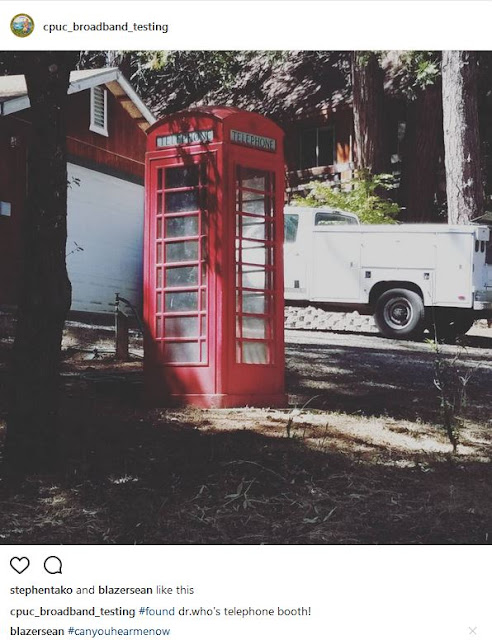 Posted by Rob Osborn at 5:03 PM No comments:

I traveled to Montpellier France three weeks ago and bought a prepaid SIM from SFR (France's #2 mobile carrier) for my unlocked iPhone. Montpellier is France's fastest growing city and its 8th largest. Here are the speed test results from CalSPEED from a test I ran near the Place de la Comedie, pictured below. 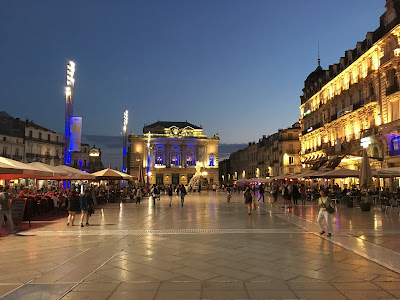 As we saw with 3G/HSDPA technology in California, ping times were long, between 342 and 347 milliseconds, and hampered real-time streaming capabilities. Granted, my phone was pinging servers on the east and west coasts of the United States, but if I were using LTE instead of 3G, I would expect the ping times to be in the range of 150-200 milliseconds for CalSPEED.

This was my first time using a prepaid SIM from a local carrier, and, not knowing how much data to buy in advance, I bought 20 gigabytes. I thought that would be fine for two and a half weeks of exploring the Languedoc area. To my surprise, by the end of my stay I had only used just over 1 gigabyte, and that was with heavy daily usage. Rather than data, it was battery life that ended up being the limiting factor.

Montpellier has a large student population and there are many new cafes catering to them. Pictured below is a sandwich board written in English, tongue-in-cheek. 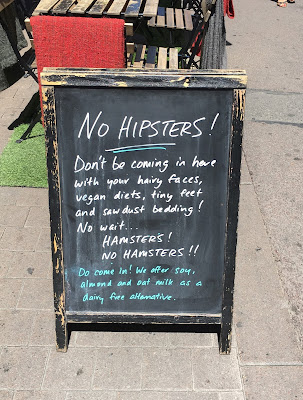 The writer Rabelais was an ordained monk and practicing physician, and he taught for a few years at the Montpellier medical college, one of France's oldest. 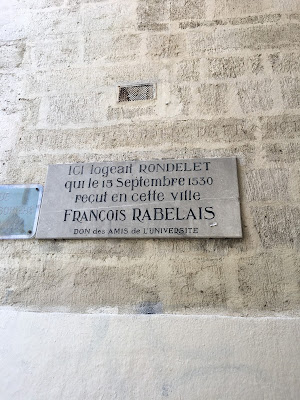 Posted by Rob Osborn at 3:45 PM No comments:

We're beta testing a new visualization tool for the California Interactive Broadband Map that displays Rounds 6-10 of our mobile field test data. Below are images from the beta site. The graphics are interactive, so you can select different parts of the charts and drill down to more specifics, such as 1XRTT only (shown below). 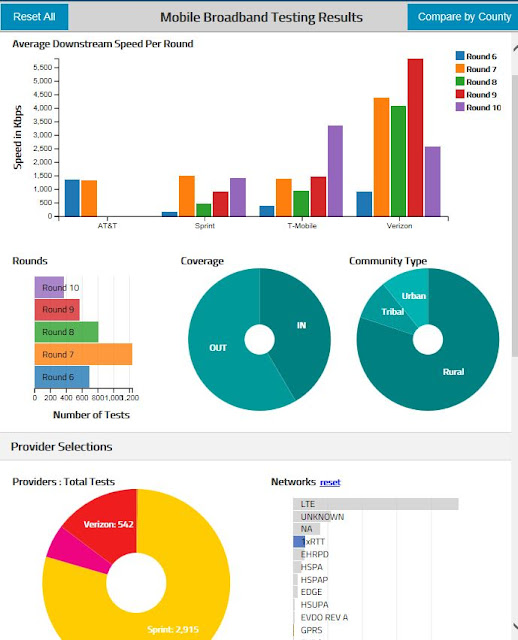 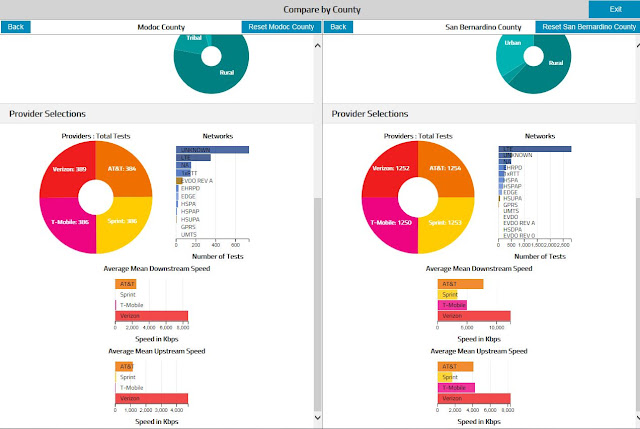 Posted by Rob Osborn at 5:06 PM No comments:


With the winter holiday season behind us, it’s time to move that unsold inventory, time to repackage those frozen turkeys as “fire chickens” and call them “fresh."

Fierce Wireless reported in August last year that T-Mobile was replacing its Binge-On sponsored data service with something called “T-Mobile One.” The new service includes unlimited data. However, as with any unlimited plan, the big question is, “Unlimited data at what speed and quality?” Unlimited data at 2.5G or 3G speeds is akin to washing your automobile with a teacup.


As I blogged last March, T-Mobile’s Binge-On sponsored data plan let you stream music and video from select content providers without incurring extra data charges, but the only way to get HD-quality streaming video was by disabling Binge-On, because T-Mobile throttled video streaming to 480 pixels (also known as “SD” for “standard definition”).

It’s no surprise that the Binge-On successor, T-Mobile One, by default only delivers SD quality video. If you want HD quality (720-1080 pixels), you have to pay $25 extra. The only difference between Binge-On and T-Mobile One seems to be the latter lets you stream any content (not just T-Mobile’s preferred providers), and it costs more. Also, just to make sure “unlimited data” doesn’t give people crazy ideas, T-Mobile limits tethering to 3G speeds and also says they’ll throttle anyone who streams more than 28 gigabytes per month (that’s a lot of data, by the way). 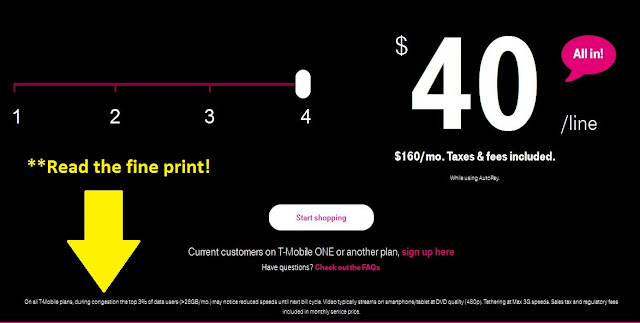 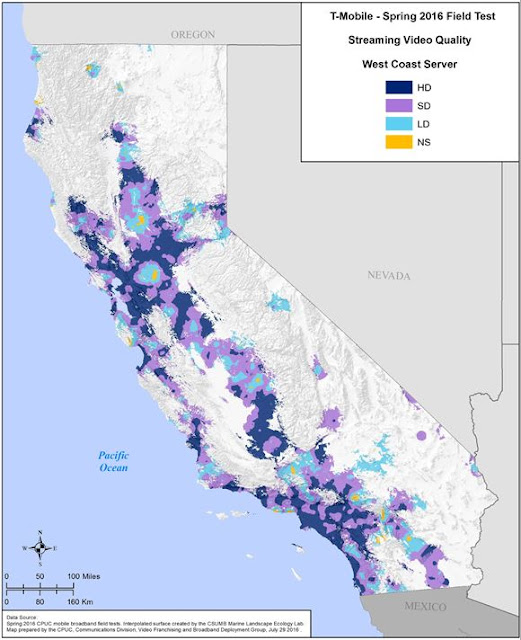 Posted by Rob Osborn at 4:01 PM No comments: 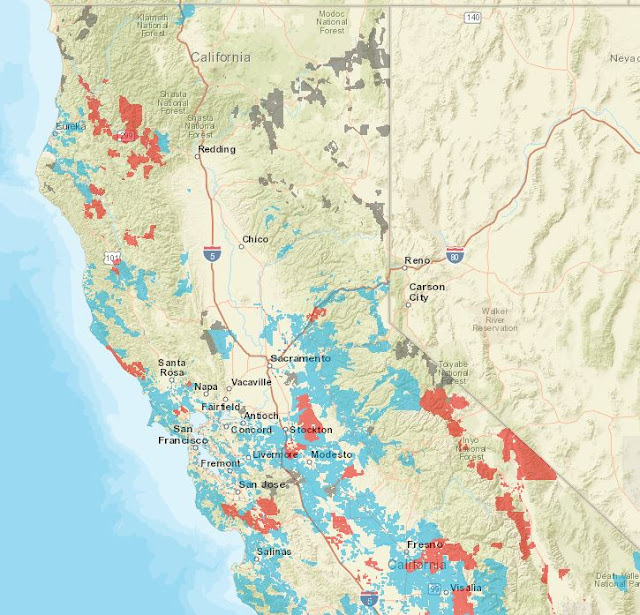 Posted by Rob Osborn at 4:03 PM No comments:

I traveled to Montpellier France three weeks ago and bought a prepaid SIM from SFR (France's #2 mobile carrier) for my unlocked iPho...

Rob Osborn
Beginning in May 2012, the California Public Utilities Commission began testing mobile broadband performance of the four major providers and reporting on the results. The CPUC tests 1,990 locations twice a year. Tests include throughput (TCP), latency, UDP packet loss, and jitter. With these metrics, we are able to estimate network quality for streaming voice (VoIP), streaming video, and interactive video. The results are available on the CPUC interactive broadband map as well as on the CPUC's website. We also offer both iPhone and Android speed test apps for the public to do crowdsourced testing. Search for "CalSPEED" on iTunes and Google Play. The results are uploaded the California Interactive Broadband map every 24 hours.